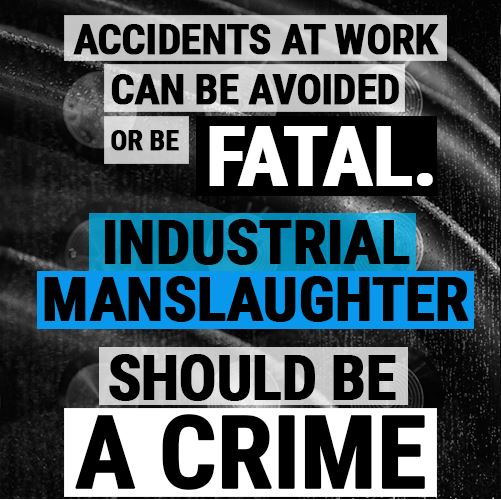 That the 25th report of the committee on the Referral of the Work, Health and Safety (Industrial Manslaughter) Amendment Bill be noted.

The Hon. T.A. FRANKS (16:54:30): I rise to make a short contribution to the parliamentary occupational safety, rehabilitation and compensation report into the Greens' Work Health and Safety (Industrial Manslaughter) Amendment Bill. I note that this is the fourth attempt to introduce such laws into this state parliament. I acknowledge the work of the Hon. Nick Xenophon (now Senator Nick Xenophon) who introduced a private member's bill in 2004 to this council. Unfortunately, that particular bill lapsed due to prorogation.

In 2010, when I was newly in this place, I became aware, and certainly very saddened, by the news of Mr Brett Fritsch, a 35-year-old man who died in July that year when a 1.8 tonne steel beam fell onto him from a soft sling during the building work at the Adelaide Desalination Plant. The Greens raised industrial manslaughter in this place in 2010, not just because of this case, but because that case embodies why this issue is so important: there are so many lives lost in our workplaces in this state. I note that the current workplace fatality toll for 2016 in South Australia is 19—that is 19 people who never came home from work. This is already an increase from last year's toll of 14 and this figure is not acceptable.

It is incredibly difficult to contact the families and the loved ones of those who have died because of a workplace incident. We have heard cases and stories of workers dying because of negligence, faulty equipment and a lack of safety standards, to mention just a few. It is because of these families and these lives lost in our workplace that the Greens and the union movement have pushed for industrial manslaughter laws in this state and, again, I acknowledge the work of the Nick Xenophon Team.

We are disappointed by the committee's recommendation to not support the introduction of industrial manslaughter laws, and we understand that at this point we have exhausted our current options to push for this particular legislative reform under a Weatherill Government. We are disappointed in Labor for opposing industrial manslaughter laws, in particular, due to the fact that they declared they opposed it before the inquiry had even commenced.

We appreciate the effort and time that they have provided and, in particular, I thank the legal and policy interest groups, including the Law Society of South Australia, the Director of Public Prosecutions and Flinders University's Centre for Crime Policy and Research. I also acknowledge SA Unions' submission to the inquiry, in particular, stating that the proposed Work Health and Safety (Industrial Manslaughter) Amendment Bill has a deterrent value because it conveys the seriousness that parliament places upon the protection of people going to work and going about their daily lives.

One of the intentions behind introducing this particular bill was to set that deterrence, and it was introduced because of the failure of prosecutions and inadequate penalties in individual cases of workplace death in our state. The Greens respect the views of the stakeholders and understand that, based on the submissions received by the committee, the members of the standing committee do not support the proposed amendment to the Work Health and Safety Act, but I hope that the work of this particular committee will not be lost in future debates. I note that the committee has made key recommendations, including:

The committee recommends that:

the Director of Public Prosecutions and the Crown Solicitor establish a protocol for ensuring that due consideration be given to prosecuting under the Criminal Law Consolidation Act, where it is appropriate to do so.

Any such protocol should not result in prosecution delays for breaches of the Work Health and Safety Act.

The Committee recommends that if an individual is charged under the Criminal Law Consolidation Act following an industrial fatality, the Crown Solicitor should still give due consideration to charging the PCBU under the provisions of the Work Health and Safety Act.

The Greens will write to the Minister for Industrial Relations and ask his office to act on these particular recommendations. I understand that the Minister has four months to respond to the committee's report and I certainly look forward to that response. I put on the record also the Greens thanks for the efforts of the union movement in calling for industrial manslaughter laws and assure them that we will continue to work with them to this goal. I particularly thank the tireless efforts of my staff member, Yesha Joshi, on this matter.